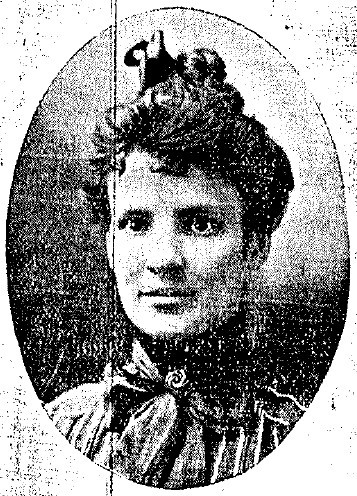 Elizabeth Bradish Wales was born in Boston, Massachusetts, in 1869 to Sigourney and Harriet Bradish Wales. She had a brother, Samuel Sigourney Wales. She attended Coates College for Women in Terre Haute, Indiana, for a year before relocating to Chicago. In 1894, she was among the first graduating class of the Armour Institute of Technology’s library school in Chicago, the first professional library science program in the Midwest, under direction of pre-eminent library pioneer Katharine L. Sharp.

After her contract was not renewed by the Quincy Public Library’s Board of Trustees due to “financial reasons” (her request for a higher salary and the Trustees desire to reduce the expense of a professional librarian), Ms. Wales relocated to Oconto, Wisconsin, here she served as the first director of the Farnsworth Public Library from 1903 to 1904.

Ms. Wales was hired as the first director of the Carthage Public Library in Missouri in 1904. She resigned in 1907 to accept the position as the first Secretary of the newly-formed Missouri Library Commission.

The new Commission launched a plan to utilize “traveling libraries” to promote the concept of public libraries across the state. The traveling libraries comprised thirty to fifty books and were shipped to a community or school for three months. Ms. Wales grew the Commission’s traveling library collection from 2,800 books to over 30,000 during her tenure. The number of counties with traveling libraries grew from eighteen in 1907 to every county in the state, except two, by the end of the decade—with multiple stations in most counties.

While the Commission’s budget was limited, Ms. Wales traveled around the state to promote libraries; meet with civic groups about organizing new libraries; and provide librarians and library trustees with advice, encouragement, and training. During her first seven years with the Commission, Ms. Wales visited 167 communities and libraries around the state at a time when less than eight percent of Missouri’s roads were paved. She also conducted the first statistical survey of Missouri libraries, which has been continued each ensuing year to the present.

In 1911, at the request of the St. Louis Public Library, Ms. Wales served as co-instructor of a six-week summer course at their Cabanne branch. The course was free to anyone doing library work in Missouri. The following year, Henry O. Severance, director at the University of Missouri library, created a six-week Summer School of Library Methods for librarians around the state in partnership with the St. Louis Public Library, University of Missouri, and the Missouri Library Commission. Ms. Wales served as a full-time instructor at the University in 1912, 1914, 1916, and 1918.

Ms. Wales was active in the League of Library Commissions throughout her tenure as Secretary of the Missouri Library Commission. She served as president in 1913-1914. Following her resignation from Commission, she continued to serve on the League’s Board of Directors until her term expired in 1922.

During the First World War, Ms. Wales served as state director for the American Library Association’s Library War Service Committee. She organized three statewide book drives to provide soldiers at base camps with reading materials, along with two fundraising drives, between 1917 and 1919. Missouri’s book drives generated seven thousand books for American soldiers. During the War, she also served as state director for the distribution of food pamphlets for the State Food Commission and chairman of the Library Publicity Committee for the Federal Food Administration in Missouri.

In 1921, Kalamazoo Public Library arranged for Ms. Wales to spend two months in their community to provide training for prospective librarians. She was working at the Chicago Public Library’s Teachers’ Room, which provided professional resources to teachers and deposit collections to classrooms throughout the city, at the time of her death on June 27, 1937.

“The progress made by public libraries in Missouri during the past years has been due in large degree to the able and devoted service of Miss Wales in their behalf, and her departure from the state is felt by all as a distinct loss.”